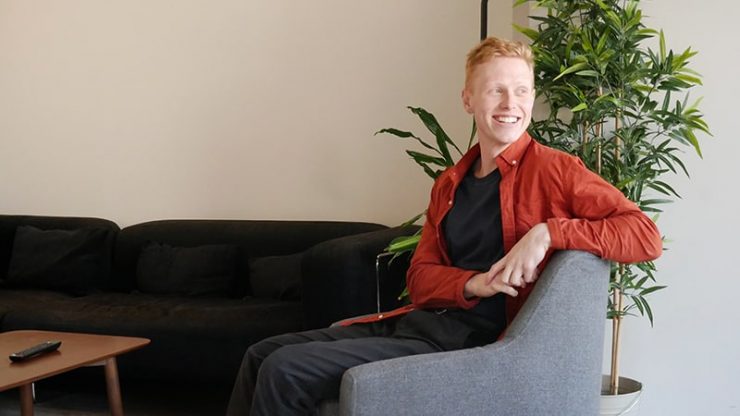 We caught up with him in his Merchant City studio about how a creative background led him into tech, his current job at neu and how his time at CodeClan helped him get to where he is now.

Jumping back to university, in ’09 I went to art school and studied Sculpture. During this time, I was also running club nights. Soon after graduating – a person who’d DJ’d at my night but moved on from Edinburgh headhunted me for a tech startup called Droplet.

Droplet was a mobile payment & loyalty app which predated Apple Pay and contactless by years. I was hired to get the app traction in Edinburgh – accepted by local businesses and used by their customers. It was 2014 and people were still spooked by paying for things with their phones – so there was an education piece as well as just selling the app.

I was at Droplet for a year and a half and ended up leading Design of the app while still managing our merchant community in Scotland.

I left Droplet to pursue my passion for music and worked as a record label intern at Sub Club, one of the oldest electronic music clubs in the world. In the end I managed that label, all external events and the club’s web shop.

How did it feel transitioning from a creative background into tech?

I think that being creative and working with tech is really intertwined.

Coding is inherently creative – when you approach each problem, you have complete freedom in how to approach it, your code editor is a blank canvas. In a way, coding is more creative than if you literally had a blank canvas and some paint: where you would be restricted to the materials that you have on hand, the size of the canvas etc..

With coding, the toolkit you have is as infinite as the internet. Maybe It’s not as expressive as physically making something, because you’re restricted to the digits on your fingers… but it’s hugely creative.

How was learning at CodeClan?

I thought the Professional Software Development course was incredibly clever – every homework was pitched slightly ahead of what you had learned during the day. You had to refer back to not just your notes, but if you wanted to hit the extensions, you would need to read the coding docs online.

This creates a very realistic approach to programming: programmers are always learning. Looking up problems and answering your own questions is one of the most important skills you can learn.

I think part of how you’re able to learn so much within 16 weeks is because you are never comfortable. You’ll be consistently pushed, but the network within the class makes it feel like you all get there together. The support network from your peers within the class is a massive help. 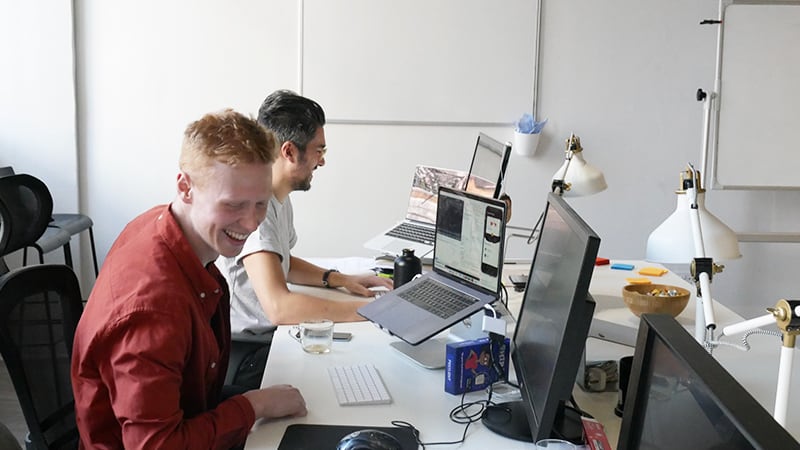 Since CodeClan you started working with digital product studio, neu. What has that been like?

neu is a digital product studio, which is a type of digital agency. neu solves business problems: we make apps, services, platforms and infrastructure. We’re involved from the ideation phase, through UX,  design, build, to the deployment and maintenance of a product. We essentially become the business’ technical team for the duration of the project.

We typically partner with non-technical founders that want to disrupt their industry, or make things better. They come to us with an idea, then together we figure out a way of making it happen.

Tell us about your role there.

My job title is Product Manager – sometimes described as a ‘mini CEO’ of their product. They play a part in setting the product vision and then define the route to building it. It’s a role that sits between the dev team and the client: Defining features, then breaking them down into tasks and prioritising / timelining them.

Because we’re small – I do a bit of everything. A little over half of my time is spent developing (full-stack React & React Native). Some weeks I’ll be designing interfaces, others I’ll be scoping out projects, others will be filled with coding. No two weeks are the same.

Do you have any advice for people considering CodeClan?

There’s no better way to do it. I don’t think there’s an alternative which is more attractive than CodeClan. I found online coding sites poor and inaccessible. I need to be able to interact with people for a learning experience, and I need clear milestones and goals.

Don’t be disheartened if you’re attempting to teach yourself through free online means and found it awkward or didn’t really enjoy it. They are not faithful development environments whatsoever. That learning experience is hugely different and doesn’t work for everybody.

Go to a taster session. The taster session reinforced that coding is what I should be doing. I remember getting buzzed off being in a classroom again. Learning in an intensive environment was inherently exciting and the subject matter was also really interesting.

You can find upcoming taster sessions and try your hand at coding. Interested in changing career? Check out our career change and upskilling courses.