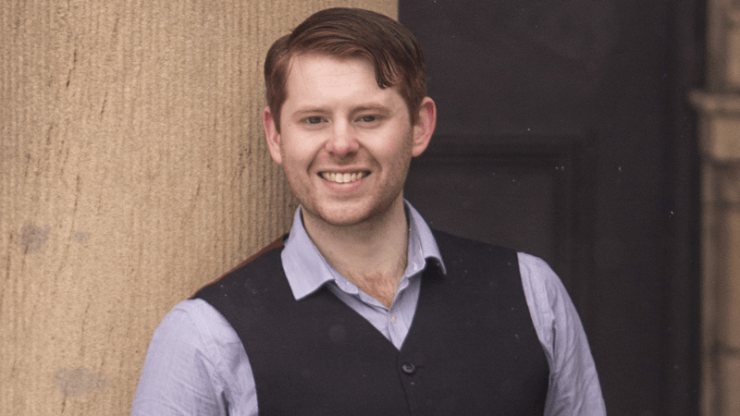 We work very closely with our partners, the Scottish Tech Army to offer our graduates a springboard into new digital careers and a chance to work alongside the organisation’s developers on a range of projects.

Launched in April last year, the Scottish Tech Army was founded to harness the skills of Scotland’s technology community and support organisations in the frontline of the fight against the coronavirus pandemic.

We caught up with Rob, who began volunteering with the Scottish Tech Army shortly after graduating from CodeClan and started working on his first project in July 2020. He explains the projects he’s been involved in and how this experience clarified his career path and the type of role he wanted.

What projects have you worked on with the Scottish Tech Army?

I initially joined the Scottish Tech Army Covid-19 Dashboard as a Software Developer, before taking on the role of Project Manager last December, as I was looking to gain experience in that area.

The dashboard was originally a project for Scottish Tech Army volunteers to work on to hone their skills. It started as an internal hackathon to see how COVID-19 data from Public Health Scotland could be displayed to the public. It went so well that the hackathon teams joined together and a plan was put in place to launch it publicly last September. Since then we’ve been adding features, making tweaks and choosing to work on areas where our knowledge was limited and we could learn the most.

I then worked on a Scottish Tech Army advent calendar, which was aimed at bringing Christmas cheer to the volunteers. It was a smaller project that I joined after hearing from one of the developers that they had a backlog building up and I ended up pairing on a couple of features, the main one being a component to record a video message from the user so a compilation could be made for later in the month.

And most recently, I joined the Supporting Our Local Economy (SOLE) project as an Assistant Project Manager. In the lead up to the launch I took on the role of Scrum Master as part of implementing a Scrum framework. It was a great experience learning more about the intricacies of Scrum/Agile, eventually taking over leading the daily stand-ups and other Scrum events.

What skills from CodeClan did you rely on and did you find yourself learning new skills?

As a Software Developer, I relied on my JavaScript and React knowledge for starting on the COVID-19 Dashboard and the Advent Calendar. I very quickly began learning new ways of implementing React components, plus more about functional programming and how a front-end can interact with a service like AWS. My knowledge of Agile methodology from CodeClan was also useful for understanding how the teams were working. This also quickly became a learning experience due to seeing how these processes work in a more complex project being developed by a remote team of people with different experience levels.

Whereas, as a Project Manager/Scrum Master, my previous knowledge of Agile came in useful as a starting point, which I then built on so I could act in a leading role and facilitate meetings. I used more experienced Project Managers around me as role models to inform what kind of facilitator I would be once in the role. My coding knowledge was very useful in understanding the pressures the developers were under and meant I could have easier conversations when discussing any issues or next steps.

How has it helped your employability?

Volunteering with the Scottish Tech Army helped my employability an enormous amount. At the start of 2021 I’d committed to a project manager career path, shifting away from searching for junior Software Developer roles. This meant searching for projects-based roles adjacent to tech and I began applying to various jobs, From 12 applications I’ve been made two offers, having attended five interviews and turning down a sixth interview invite that came in after my first job offer. I’ll be starting as a Project Leader in June.

Had I not gained this Project Manager/Scrum Master experience I don’t think I would have been invited to some of these interviews or received the job offers. I was able to draw on experience from the the Scottish Tech Army, CodeClan and my previous work experience.

What’s your advice for CodeClanners thinking about joining the Scottish Tech Army?

Firstly, whether you think you might get involved straight away or not, take the step of signing up so you can see what’s going on. You’ll get a feel for things and you’ll find information about projects you could join.

Secondly, once you’re in I highly recommend joining the #virtual-watercooler channel on Slack. Every Monday morning you get assigned to a group with three other people for a chance to have a casual chat.

I’ve joined quite a few calls over the last year and spoken to a range of people from Scottish Tech Army management to Lean and Agile coaches and Project Managers to Graphic Designers. From these conversations I’ve often been inspired to look into projects I otherwise might not have considered and in a couple of cases I’ve had people very experienced in the tech industry give me great advice on my career path. There are lots of enthusiastic and encouraging people in the Scottish Tech Army and I’ve really enjoyed all the different conversations I’ve had. It’s absolutely worth throwing yourself into these conversations!