One year after CodeClan: Meet Matthew, Developer Evangelist at Wallet.Services 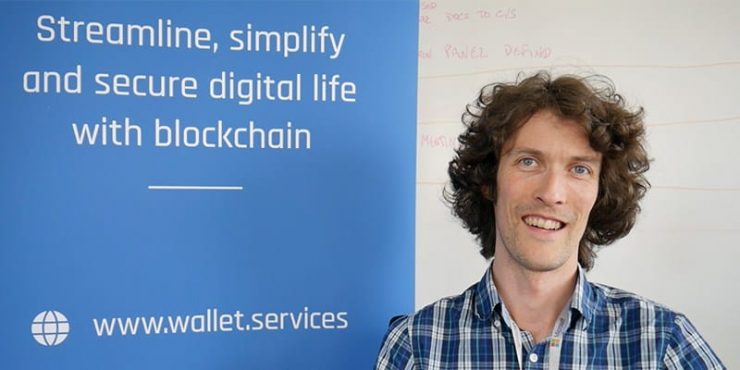 CodeClan graduate Matthew talks to us about startup life, learning blockchain and his first year as a Developer Evangelist at Wallet.Services.

What is a Developer Evangelist?

My role is probably more ‘developer’ than ‘evangelist’. I’m working in the office developing code, working with the other members of the team.

The ‘evangelist’ part is the idea that Wallet.Services is quite a technical product and we’ll ultimately be selling to developers, so we need to engage with them. That part of my role may increase as the company grows, but at the moment we’re focused on building a product and getting it out there.

The allure of blockchain

I started at Wallet.Services in the beginning of March last year.

CodeClan try to get employers in to talk about their company, what they’re doing and if they’re hiring. Wallet.Services came in during Week 3 and gave a presentation about what they do and how blockchain works, and it kind-of blew everyone’s minds – no-one really understood how it worked and that included me.

But something just stuck and I thought it sounded really cool; it sounded like the future and I wanted to be involved.

Getting a job at Wallet.Services

When it came to the end of the course we were doing Speed Networking – that’s when CodeClan get employers in to interact with the students. CodeClan’s Student Placement Manager said that if we were interested in any companies who were not coming to Speed Networking, we should let them know and they’d try and get them along or set something up.

I immediately thought of Wallet.Services. I was really interested but noticed they weren’t on the list. So the next day I heard from CodeClan that someone from Wallet.Services wanted to speak to me at 11 o’clock.

And that was it basically. I went up and spent an hour and a half, just chatting away. Then there was another session when I went in and chatted with them and they said “yeah, we’ll give you a job”. I was quite lucky because they were right on the edge of having the money and time to get someone in.

From architecture to tech startup

I studied architecture when I left school and I absolutely loved that to bits; I wouldn’t change that for the world. But the realities of practicing architecture and studying architecture are very different, so I decided not to go into it.

I ended up in a building management role with a public sector company for about eight years. It was a really secure job, kind-of enjoyable and a great team to work for.

But there was no progression. And that was what spurred me to look for CodeClan and do something else. I thought if I stayed there another 10 years, that’s 18 years in total. I’d end up thinking I could’ve done something else with my life.

When I left CodeClan and was thinking about joining Wallet.Services, obviously they were a small startup and they didn’t have financial security, so it was a risk to join.

They didn’t make any pretence that I would have a secure job, but said they’d still love to take me on and see how we got on. I was able to take that risk and that opportunity because I was financially secure enough.

CodeClan vs. life as a professional developer

CodeClan was tough. You learn a huge amount in 16 weeks.

But when I joined Wallet.Services it was 100 times tougher. That’s because at CodeClan you’ve got brilliant instructors and a clear path of travel. CodeClan is all about teaching and supporting you through learning, whereas at Wallet.Services it was the CTO and me. And he had his work to do. It’s not that he didn’t want to talk to me, it’s just that he couldn’t spend all day with me.

But that made me very self sufficient, which is an important skill when you’re a software developer. You’ve got to be able to solve problems yourself, and if you can’t get it the first time, you need to find out how you can come at it from a different angle. Google is your friend.

It seems crazy that I started out and we were four and a half people and now we’re up to 14 people: there’s four on the dev team, we’ve just taken on a senior, we’ve got a Product Officer and a consultant and it’s all just exploded.

And I’m one of the more senior people there just because I’ve been there the longest.

Blockchain is not something that anyone coming in the door knows much about because it’s so new. I’ve got a year’s start on even the most senior developers coming in the door. They might know how to run a team building software, but with blockchain I know more than them just by default.

Back in March last year our Technical Directer, Alan, said: “Look, I’m going to make you a blockchain expert and that will make you valuable because no-one knows it,” and that’s come true already.

I think CodeClan have found a niche and they’ve found a really good system of creating skills in people that can fill this niche. The fact that Wallet.Services decided to take people on from there might seem crazy, but Wallet.Services have a really high opinion of CodeClan and now we’ve got four CodeClanners on the team and I’m one of them.

It’s a risk and it’s expensive. You’ve got to pay the course fees and you’ve got to stop earning for four months. But I think there is a niche – there are a lot of jobs out there and the new way of doing software development is about teams and different skills. It’s not so much about what you know, it’s about how you operate on a team.

CodeClan sets you up really well for that. You can’t teach software development in 16 weeks, but you can get the first bite out of the apple so that you can go into a team and start being productive. I’ve never done a Computer Science degree but people who have say you probably write more lines of code doing a CodeClan course than you do doing that degree.

When I was considering whether CodeClan was the right thing for me, I had a little bit of experience doing software development so I was wondering whether I’d get full value for money out of the course because I have that bit of experience. Would they teach me a lot of stuff I already knew? I decided to do it, and within the first week, everything I was learning was new.

CodeClan gave us the confidence to see that we’re on a journey and that the destination is over there, but don’t expect to know it all at the start.

Our committed students have completed 800 hours of immersive coding. Equipped with an agile mindset, they’re operational from day one. Learn more about hiring.