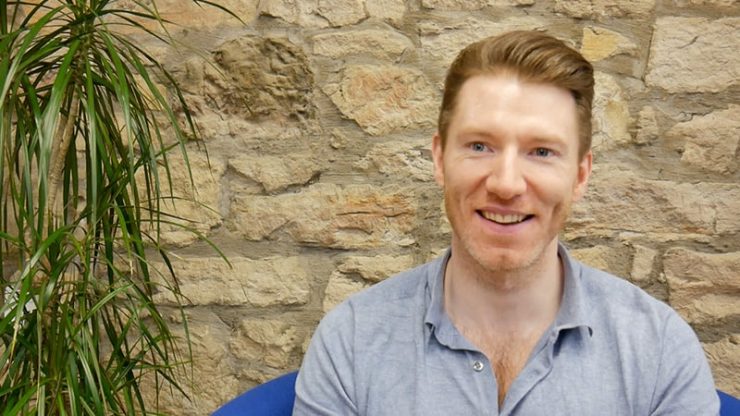 As CodeClan graduate Tom looks back on his first year at Oracle Platinum Partner Inoapps, we caught up with him about databases, learning on the job and life as a software developer.

CodeClan was a great learning experience. I came towards the end of the course with an open mind as to what journey and what direction I wanted to take in the tech industry. I didn’t have any ideas that I had to be in a particular role or work with a particular language.

I had the opportunity to come here to Inoapps for an interview and I was interested from the start.

At the time, I quite enjoyed structure and working with databases; even working with SQL and PL/SQL which is the programming language that incorporates SQL. It’s something that’s been enjoyable for me because I like structure.

My favourite language when I was at CodeClan was Java because it’s more structured. People might have different opinions but that’s the beauty of it all. We all like our different languages.

Looking back on a year at Inoapps

Essentially, I was a junior developer during that time but there was a lot of onus on me to move on and to take on higher responsibility roles that affect the team.

Inoapps is a good place to work: it’s fairly relaxed, but at the same time there’s an intensity to the work that we’re asked to do. It’s a client-facing role as well, which I enjoy – so you’re discussing things with clients like requirements for applications that are being built or upgrades to existing applications.

And all those types of things are educational in the beginning because as it’s a new career for me in the tech industry, I learn a lot from the discussions going on with clients and in-house with fellow developers and more senior guys.

Overall, I’ve had a very interesting year. I’ve learned a lot at Inoapps and I’m looking forward to the next year and what it’s going to bring.

The challenges of working as a software developer

The initial challenge at Inoapps was learning SQL efficiently and getting to a very good standard so that I was able to work effectively in my job, and learning PL/SQL.

And once I got to grips with that, I moved on to Apex, which is a rapid application development tool. We use this to build the front end of applications that are hosted online. That’s a learning stage. And that was the initial challenge, but we’re given lots of training, time and support to do that.

Then, as an individual challenge, I was given my first big project – not big for the company but big for me. Working through that, there were a number of different bugs along the road and things I had to contend with. It was a great opportunity to get in at the deep end and learn the ropes.

The benefits of being a CodeClan graduate

It’s good to have other people here at Inoapps who’ve done the CodeClan course previously because then when you come in to the company you’ve got kindred spirits in a sense. You’ve got other people who you can go and talk to about training or about any sort of problems that you’re finding and go to them as a first stop for help.

Inoapps were involved at the beginning with CodeClan as well, and that certainly helps because they know what’s happening at CodeClan and the types of people that are coming through. They’re familiar with the learning that we’ve already experienced at CodeClan in preparation for our first job in the tech industry.

Life as a ‘techie’

Sometimes you think about a techie and you might think about people who are a little bit ‘unique’ and keep themselves to themselves but here it’s a bit different because people are all quite friendly and chatty. It’s quite a good environment that way. Maybe I landed lucky!

My wife likes to talk to me about what she does and I don’t get what she does, and it’s vice versa! So we don’t really talk too much about work.

My niece recently asked what I do as a job and I tried to put it into layman’s terms but I could tell by the look on her face, I think I put her off the tech game! I asked her later on: ‘Do you want to be a developer?’ and I just got a blank stare. But she’s only 11, so she’s got lots of time to pick things up.

Generally I think people get what I do – whether I’m talking to friends or out in a bar or whatever – I think they understand the bigger picture of what I do.

The nitty gritty of it is a different thing, unless they’ve got some sort of coding experience then they might not understand the day-to-day activities. There’s a lot of talk in the news these days as well. Tech is a big game.

At the end of the day it’s a business that we work in and we do our best.

Our committed students have completed 800 hours of immersive coding. Equipped with an agile mindset, they’re operational from day one. Learn more about hiring.