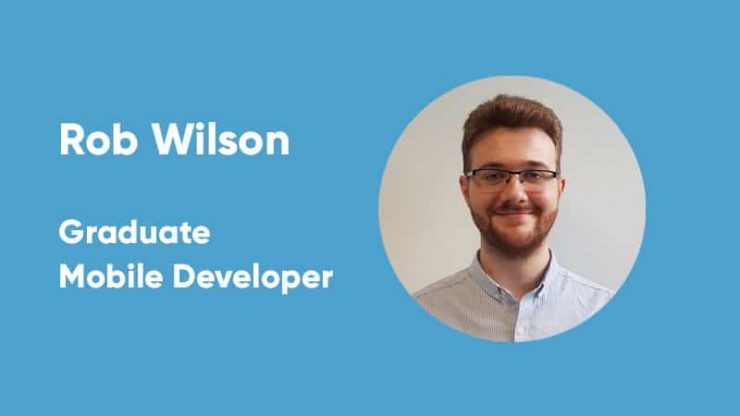 Rob Wilson graduated from the University of Edinburgh with a degree in Chemical Engineering. He knew when he graduated that he wanted to change direction and move into a career in technology and he thought CodeClan was the obvious route.

He heard about CodeClan from several tech companies when he was applying for jobs, as they recommended he get tech training from CodeClan before going into employment.

Rob was accepted onto the Professional Software Development (PSD) course and felt the course was challenging and there were some very useful non-tech learning opportunities, too. In particular he was pleasantly surprised to learn so much about agile working.

Key non-tech elements of the course

He found agile, team work, logistics, time management and group work with other students to be some of the most beneficial learning outcomes.

It may seem like the table tennis table was just there for timeout, but it was in fact really useful for meeting and getting to know other students. Relationship building with the other students was a key part of settling in and being comfortable with each other, which was key as classmates are an important part of a student’s support network.

No-one said the PSD course would be a breeze… The time commitment was probably the most challenging element for Rob. It wasn’t a 9-5 course. You do 9-5 at CodeClan and then have homework most nights. It can be easy to run yourself down so Rob felt it made him figure out his own limitations and how far he could push himself.

Looking after yourself is a big part of being a student, knowing which battles to pick. You are of course encouraged to do as much as you can, but you need to decide for yourself when to stop for a breather. You are far more productive when you take that time out, enjoy and manage other parts of your life, then come back ready to take on the next challenge.

Rob had set up a number of interviews through CodeClan’s Industry Partner Programme speed networking events and had managed to secure a job within three weeks of graduating.

During his interviews, Rob said employers were most impressed with the non-tech learning which accompanied the course, in particular, agile methodologies.

Now, Rob wants to get hands on coding and development experience using different tech and building his skillset, starting with Apple’s Swift for iOS.

Longer term, he wants to move into a team leader or product owner position, as he loves working with people and getting the best out of them and has built a keenness for aligning his work with the project vision.

Rob started his new job on Monday, 25th March and we wish him the very best!