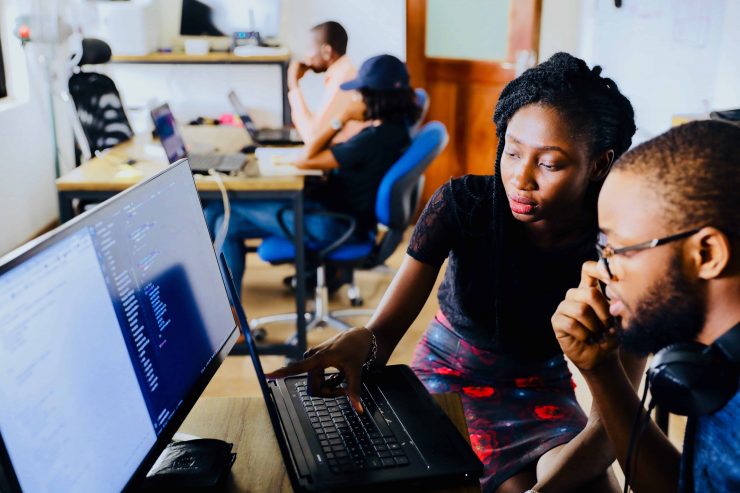 Quitting your job to learn programming full-time is a big step for our students, but it’s a challenge that CodeClan graduates relish as they learn new skills, future-proof their career and enter the world of tech.

“Changing career at 32, I was expecting to be the awkward dinosaur of the group but if anything, the youngsters were the odd ones out,” says Richard Haigh, who graduated from Professional Software Development. “So many were experienced and successful but had reached a point in their career where they wanted to change things up.” Richard, who now works as a Reproducible Analytical Pipelines Developer at The Scottish Government, had previously held roles in hospitality and didn’t feel challenged. “I wanted to take my management skills and train to enter a new and growing industry where I could always be learning new things but with better pay and time for myself,” he says.

Similarly, Simon Atkins, 33, a digital marketer who had studied Arabic at university and been a teacher in the Middle East, was also feeling frustrated. He wanted to be able to do some of the more technical aspects at his job. “I’d always been interested in web development,” he says.”I also wanted to future-proof my employability and I knew there were endless opportunities in software development, as well as higher salaries which was a big draw for me.” He now works as a Frontend Web Developer at Flick.

After a long career break, Julie Atherton was keen to get back into coding, but her managers wanted her to teach herself digital skills, but she craved structure. “I did a week-long course which covered HTML and CSS, but it kind of just skimmed the surface,” she says. She started a coding club at her children’s school, and went along to a taster session at CodeClan’s Inverness campus. “I needed to broaden my skills and I wanted to see what other companies and roles were out there – that’s why I signed up for the course.” After graduating from Full-Stack Web Development in Inverness, she now has a position at Pinnacle.

For Richard, the feeling of teamwork was the most enjoyable part of the course. “Everyone on the course has made this incredible, life-changing decision to jump into a new career with both feet and there’s no denying, it’s a huge gamble,” says Richard. “Taking that risk together really bonds you, and you quickly come to rely on each other for help when you feel lost with all these new concepts.”

Julie, who was part of the first cohort in Inverness, credits the teamwork and support as one of the best parts of the course. “I’ve been really lucky with the group, the course structure was really great,” she says.

Going back to studying can be a huge transition for someone who left school of university years ago. Developing a growth mindset – learning how to learn – and taking care of your mental health are aa priority at CodeClan.

“We got a huge amount of understanding and support from a team of instructors,” says Richard. “Our cohort of approximately 20 had 4 rotating instructors and a host of career support workers and even mental health support when you need a moan.”

Simon’s course leader, Pawel, was a fantastic “pillar of support”. “I met with him a couple of mornings before class to work through some things. All of the teachers were really supportive and kept reassuring us we were doing all fine, even when it didn’t feel like it!”

Julie found the supportive and friendly environment she was looking for at CodeClan. “I’ve never felt lost – I’ve been able to take some time with the instructors to chat through anything that I was stuck on,” she says. “It’s been so encouraging. I wouldn’t have gotten through without everyone’s help.”

However, nothing worth doing is ever easy, as the budding programmers soon found out.

As for Simon, he was surprised by how challenging learning to code was. “I knew it was going to be difficult, but the reality of 60-hour weeks was something else! The camaraderie was strong as a result and I made some great friends who I still see a year later,” he says. “I loved learning how to build full stack web applications from scratch, and in particular I enjoyed working on the front end and thinking about UX and UI design.”

“I wasn’t expected to learn so much during my time the CodeClan,” says Julie, noting that the pace was quick. “I surprised myself, I haven’t studied anything like this for so long but I got into it and the support really helped.”

Simon recommends the course for anyone who wants to break into the Scottish tech scene and future proof their career – with the caveat that the course is extremely hard work. “Being a software developer is also extremely challenging,” he says. “But the course curriculum is great, the teachers are wonderful, the friends you make are fantastic, and most importantly, there are so many job opportunities for software developers out there.”

“Without CodeClan, I would not have been able to find my current role and would certainly never have found the confidence to learn the array of new skills I have,” says Richard. Julie agrees; “CodeClan has given me the confidence to progress – I believe that I can do it now.”

Simon doesn’t think he would have been able to break into the tech scene without CodeClan. “For the first time in my life, I have recruiters pestering me on LinkedIn,” he says. “When I started looking for my second software development role a few months ago I managed to get two job offers within three weeks of hunting. The salary jump after a year of working as a dev was 33%.”

Interested in finding out more about our courses? Find out about the next info session in Edinburgh, Glasgow and Inverness.

🚨THIS IS NOT A DRILL🚨 FREE Intro to Softwar

We're delighted to announce that we'll be deliveri

A massive thank you to everyone that made last wee