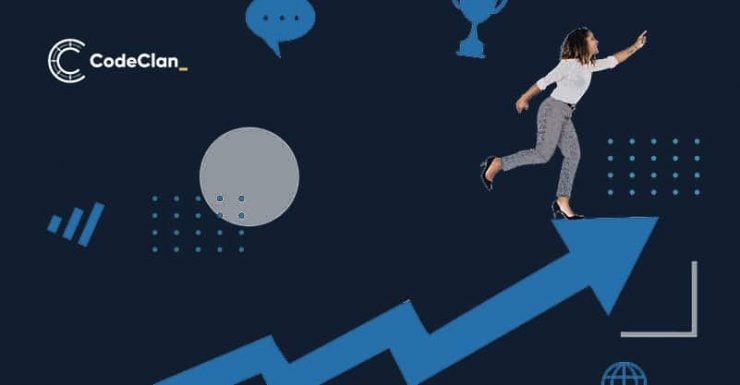 Placing our graduates into work is hugely important to us at CodeClan and that’s why we’re watching the jobs market carefully for opportunities and trends, in the tech industry and beyond.

Here’s why things are looking positive

Back in May, we reported to you that things were looking increasingly positive for job-seekers in Scotland. According to s1jobs, advertised roles in Scotland had increased by 50% between February and March and again by 23% between March and April.

This positive trend also applied to CodeClan graduates. Job placements between February and April this year saw a 59% increase on the previous three months and a 180% increase against the same three months in 2020.

Looking at trends nationally, the job market remains strong. According to s1jobs, the number of advertised roles remained steady in May with 64,000 advertised jobs across Scotland, a whopping 174% increase against May 2020.

The Office for National Statistics also reported that the number of payrolled employees in June increased for the sixth consecutive month across the UK.

The tech sector is continuing to show similar signs of strong growth. Digit recently reported that across the UK, more than 100,000 job vacancies have become available per week since February, with open roles rising to 132,000 in one week in May.

Furthermore, figures from Adzuna and Dealroom suggest that job vacancies across the tech sector now make up 12% of all open job posts in the UK, and growth is at a five-year high.

The roles most in demand? Software developers, web developers and data analysts.

Looking at the second quarter of 2020 as a whole, placement of CodeClan graduates has continued apace, increasing by 113% compared to the same months in 2021.

Robyn Haldane, CodeClan’s Industry Account Manager said, “It’s fantastic to see the high level of opportunities available to our graduates and to be recognised as a key source of talent for our partners within the Scottish digital economy.

“The industry demand is validating our graduates’ commitment to change the course of their careers and we are clearly seeing this growth coming through our own pipeline. The feedback we are hearing has been extremely positive and the trajectory we are witnessing looks set to continue.”

If you’re interested in exploring historic data about CodeClan graduate placement, make sure to read our outcomes page.

If you’d like to pick up the skills need to launch a career in software or data, we’re currently enrolling new students onto our Professional Data Analysis and Professional Software Development courses. Get started by joining us at our next coding workshop.