The woman behind CodeClan: Melinda Matthews-Clarkson 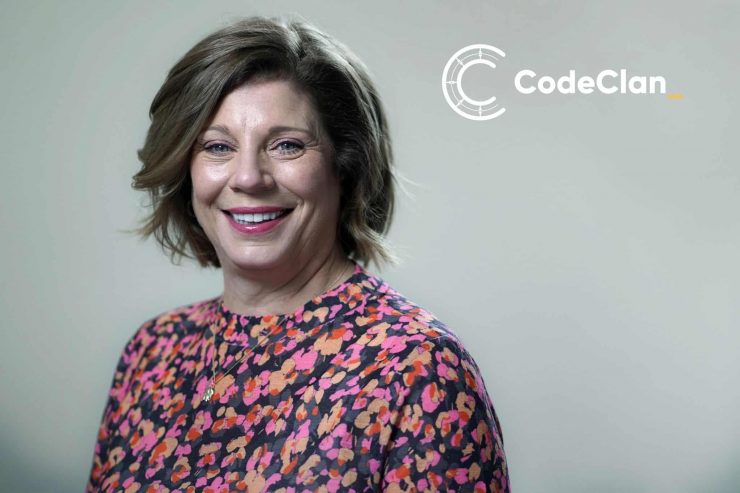 In preparation for International Women’s day, we have been catching up with some of the amazing women behind CodeClan, starting with our CEO Melinda Matthews-Clarkson.

We talked about the current technology industry landscape in Scotland, the evolution of the sector, her career and inspirations.

Melinda Matthews-Clarkson is a former senior figure at IBM who has more than 28 years experience in the technology sector. Melinda joined CodeClan in 2017, and as the leader of CodeClan, she is active in diversity awareness and inclusion events, and leveraging unique skills to build high performing teams and managers for innovation.

Originally from the US, Melinda moved to Scotland in 2007 and was the Vice President of Commerce Partnerships at IBM. She has been deeply involved in bringing a range of new product offerings in Cloud, SaaS, eCommerce and Digital Marketing to the marketplace.

It all started when I moved to Connecticut and I got a job as a marketing manager in a software firm. It was a very small company, there were maybe twelve of us.

I started in marketing and then I moved to sales in that space, it was a mainframe email system to be exact. And then I kind of fell into big software!

My best friend had an interview with Computer Associates, but she then found out that she was pregnant with twins so I went to her interview instead! Kind of like faith.

Long story short, I got the job, and I worked at Computer Associates for seven years as a sales person.

It’s funny because when I took programming classes in University I was not really interested to be honest.

But I have been surrounded by STEM all my life, my dad was a scientist and my mum was a teacher, so there was so much STEM around me! We would play logic games, build our own board games, I was fascinated about stars and planets and cooking (which is maths and chemistry at its best).

It was when I got the job at Computers Associates, when I started understanding how computers worked it opened my mind to “If I can think it, it can happen!” Software was what was making the world go around.  I learnt so much about so many different things.

So curiosity, curiosity is what really got me into tech.

I think the biggest change was when everything went from systems to apps on a phone. Around the 2000s when you could start downloading apps on the first Apple devices, prior to that, you did not do much with your cell phone, you could only store contact, calendars, those types of things.

At IBM,  I started seeing technology do really cool things; voice recognition, digital pictures being stored in masses, content management systems, cloud computing and then  Artificial Intelligence came out, predictive analytics, cognitive analytics, a huge leap that we would trust a computer with our lives. It was overwhelming and exhilarating at the same time.

I hear a lot about the leverage of data analytics in companies, robotics and AI. And I would also have to say e-commerce, which is still running the world when you think about it. Most companies would have been under when COVID hit if it wasn’t for e-commerce. And I remember being part of the team that launched ecommerce at IBM, which makes me very proud.

The tech landscape in Scotland is nice and broad, from agriculture to creative industries to the space. But that is technology at the moment, you know, from fintech to sustainability, companies like McDonalds that allow you to round up your order for charity for example.

But in Scotland, I think we just don’t have enough people. The net, the innovation, the knowledge, everything is here, we just need more people to go bigger!

One was my father, for sure. He was a scientist, he worked on the Mercury Project to put the first satellite up in orbit! He did many great things in his life and he taught me a great deal.

Then, there’s a lot of women that I look up to, this one is controversial but Margaret Thatcher for example. She is not very popular, but politics aside, I just admire how she managed being the only woman in the room, there was no place for women in Westminster at the time to go to the loo!  Talk about being unwanted in the role but she was determined and she made a path for many women and many have followed her lead.

Same as Nicole Sturgeon, you may not agree with her politics but it’s amazing how she navigated the pandemic, how did she manage? How does she not melt down and cry?

But really, anyone that has overcome adversity inspires me.

Tech is an enabler. That’s it. You don’t have to be a programmer or a PHD in quantum computing.  Understanding what the technology does is really important.  That is the key to today’s world.

The next one is learning, always learning. Be curious.  Ask why?  And then ask Why Not?

The tech industry is male dominated (although it’s changing slowly)  and confidence is very important. I always tell women that are apprehensive of going into tech – You have a right to be there.  50% of the world are women and our ideas, needs, voices need to be heard in the tech world.   Leverage facts, figures, data to be confident in your work and your insights will be heard and you potentially could be part of something bigger that humanity needs.

How Emil switched careers, from translator to Software Engineer