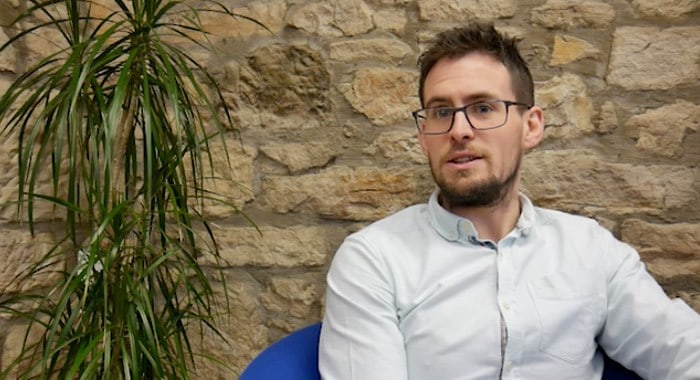 Approaching his second anniversary at Oracle Platinum Partner Inoapps, our graduate Alasdair reflects on life since CodeClan and what it’s like to be two years into a career as a Software Developer.

Although Alasdair enjoyed many aspects of his career as a primary school teacher, after six years he decided he wasn’t happy and needed a change. “I left teaching because I had a bit of a meltdown,” he says. “It just came to crunch time and I’d had enough.”

Discovering our immersive Professional Software Development course, Alasdair saw an opportunity to find something more suited to his way of working.

“It really seemed to fit the way I was thinking, the way I like to structure things,” he adds. “I like the logical approach to things, that’s what drew me to tech. Teaching is just too wide, it’s too illogical at times.”

“Life is too short to stay in the same career if you don’t want to be in it. The decision is the hardest part, once you make the decision all those worries disappear.”

I was a big believer in “Get industry experience. Don’t hang about.”

Explaining that the course was “very enjoyable but also difficult at the same time,” Alasdair found it challenging to be “returning to school, having to admit to yourself and people around you that you don’t know anything anymore.”

Thankfully his primary school teaching helped as he was used to telling his pupils, ‘You should be asking questions, you shouldn’t be scared of not knowing anything.’

By the end of the course, Alasdair admits he “just wanted to get into a job. I wasn’t going to be picky in that sense. I was a big believer in “Get industry experience. Don’t hang about.”

He was drawn to Inoapps by the business-critical aspect of the company. “They keep the lights running for huge companies,” says Alasdair. After a conversation with their VP, Dermot, Alasdair was hired as a BI Junior Developer – Business Intelligence – and although he hadn’t learned the Oracle programming language at CodeClan, it wasn’t a barrier.

“Thinking back on it now, Dermot didn’t mention the fact that I didn’t know Oracle. He wanted to know about me, know about my previous skills, was I willing to work? He didn’t ask me about Oracle so I never actually thought “I don’t know Oracle, what am I going to do?” I felt Dermot just wanted to know what I was about and what my soft skills were. He was willing to teach me the rest.”

Getting a job in tech

As with most of CodeClan’s students who come to the course from previous career, Inoapps appreciated Alasdair’s transferable skills.

“Because of my teaching background Dermot asked me if I would deliver some training to one of our customers in America that had a requirement to learn about Oracle’s Business Intelligence tools. My previous teaching experience meant Inoapps was able to drop me into a classroom of adults and knew I would deliver.”

Alasdair also discovered more aspects to the job than the logical side he originally felt drawn to. “When you get dropped into the job you see there’s a whole creative aspect to this that people might not necessarily be aware of. There are a lot of design conversations.”

After a year as a Junior Developer, Alasdair spoke to Dermot about moving into another area, soon finding himself in the Products Division as a Products Developer. “Once you’ve shown you’re willing to learn, ask questions, work hard, then definitely it’s an organic process.”

"My advice for graduates is champion your technical skills but also bear in mind that you’ve got soft skills that you’ve built up from your previous career.."

Alasdair has a few pieces of advice for anyone thinking about joining CodeClan, starting with asking themselves: ‘Am I happy?’

“Secondly, do you want to code or go into something that will involve code? Go online and try out some of the many free coding tools that are available to see if you enjoy it. If you do, then go for it because you’ll change your life. I have!

My advice for graduates is champion your technical skills but also bear in mind that you’ve got soft skills that you’ve built up from your previous career that graduates coming out of university will not have, and that will stand you in good stead.”